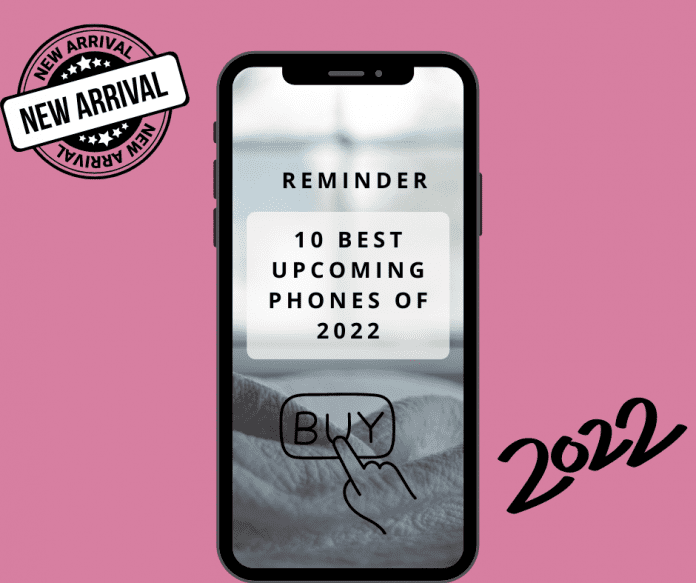 There are many upcoming phones But the main features are Foldable phones, flagships, and a slew of other new handsets which are the 10 best upcoming phones 2022 explained below.

As we all know, the year 2021 was a wonderful one for phones, but the year 2022 might be even better. We’ve already seen the Samsung Galaxy S22 range, which includes the radically different Samsung Galaxy S22 Ultra, and Apple has released a new phone in the form of the affordable iPhone SE (2022), while there’s talk of a major redesign for the iPhone 14 Pro, a slew of new foldable phones, and dependable flagships in the future.

So there’s a lot coming up in 2022, and some of it is arriving fast, with several of the year’s most important phones due in the first two months.

Although it’s an obvious choice, the iPhone 14 and its siblings are the most anticipated phones of 2022, so we couldn’t leave them out.

That excitement is understandable, since the iPhone 14 Pro and iPhone 14 Pro Max are expected to have completely new designs, with no notch and a punch-hole camera instead (or possibly two camera cut-outs).

We’ve also heard rumours of a new model called the iPhone 14 Max, which would be a base iPhone with a large 6.7-inch screen that would replace the iPhone 14 small.

Leaks also suggest to significant camera enhancements, with 48MP sensors on the cards (up from 12MP on current models), and given that these are iPhones, they’ll almost certainly have a lot of power.

Expect a slew of new leaks leading up to the September introduction of the iPhone 14 series.

Although the OnePlus 10 Pro has already been launched, it is still not available at the time of writing, so we’re still counting it as an upcoming phone.

We’ll have to wait and see how well everything comes together in practise, but we’re excited to find out. By the end of March, the OnePlus 10 Pro should be available in US and UK retailers.

We don’t know much about the Google Pixel 7, but we’re convinced it’s coming – even if it won’t be available until October 2022.

We might not see as many changes this time after Google’s enormous redesign of the Pixel 6 line-up, but the Pixel 6 re-energized the lineup and got us enthused about it again. We’ll take the Google Pixel 7 even if it’s simply a more polished version of that.

Unsurprisingly, early rumours hint to a successor to Google’s Tensor processor, as well as the Pixel 7’s cameras being identical to those of the Pixel 6. There’s also a chance that in 2022, we’ll just see one model, so there won’t be a Google Pixel 7 Pro.

The Samsung Galaxy S23 isn’t the only phone we’re looking forward to; the Samsung Galaxy Z Fold 4 is also on the way, and it might be the finest foldable phone ever made, not just by Samsung but by any company.

This isn’t expected to arrive until August or September, but it might have a lighter, more dust- and water-resistant construction than the Samsung Galaxy Z Fold 3, as well as a larger battery and an upgraded under-display camera.

In fact, according to one source, the Galaxy Z Fold 4 might include two greatly enhanced under-display cameras, with Samsung perhaps using the same cameras as the Galaxy S22. It’ll almost certainly have a slot for the S Pen stylus.

The Sony Xperia 1 III is the greatest phone Sony has released in a long time, and it has piqued our interest in the Sony Xperia 1 IV, which is expected to debut in early 2022, probably in April.

So far, we haven’t heard much about it, although one source claims it will feature the same 50MP primary camera as the Google Pixel 6, while another claims the front-facing camera will be created in-house by Sony.

In any event, we’d anticipate fantastic things from the camera, given Sony is known for focusing on this area. That, and the screen, which, based on previous experience, is expected to have a resolution of at least 4K. However, if you were looking for a fresh design, you will be disappointed.

The Huawei P50 series has already been announced, but it will initially be accessible exclusively in China, so we’ll have to wait for a global release.

It also features a 4,360mAh battery with 66W rapid charging, however it runs Huawei’s own Harmony OS 2 rather than Android and lacks 5G owing to the continuing Huawei ban.

In many aspects, the normal Huawei P50 is comparable to the P50 Pro, but it has a little smaller screen, a 90Hz refresh rate, a 4,100mAh battery, and a different camera setup, with a 50MP primary camera, a 13MP ultra-wide camera, and a 12MP telephoto camera with 5x optical zoom.

The Google Pixel Fold has been rumoured for years, and we’ve now learned that it might be released in late 2022.

According to rumours, the Google Pixel Fold will include a 7.6-inch foldable OLED display and the same Tensor chipset as the Pixel 6 series. For the time being, we’d take everything with a grain of salt, but this may be one of the few non-Samsung folding phones worth getting excited about.

So yet, this has only been rumoured, but it is said to feature a massive back camera hump rippling with lenses. That’s on top of hardware that will be at least as high-end as the rest of the line, which will include a Snapdragon 8 Gen 1 processor, a 120Hz refresh rate screen, and at least 12GB of RAM.

Xiaomi may possibly be working on a higher-end phone, with rumours of a Xiaomi 12 Ultra Enhanced circulating. So far, all we can tell is that if you want to buy it, you better definitely start saving.

We’ve been waiting for the Nokia 10 for a long time, and it’s gone by several names since it was first speculated — it was first expected to be debuting as the Nokia 9.1, but as time passed, that changed to Nokia 9.2, 9.3, and finally Nokia 10. Given Nokia’s new naming system for phones, we’ve even heard that it may be called the Nokia X60.

It’s also uncertain when this phone will be released, as many supposed release dates have passed with no trace of it.

According to current speculations, the Galaxy Z Flip 4 will have a 6.7-inch main screen and a 1.9-inch cover display, however we’ve heard that the cover display may rise somewhat, and that the phone will also have a third back camera and a larger battery. This phone is expected to be released in or around August.