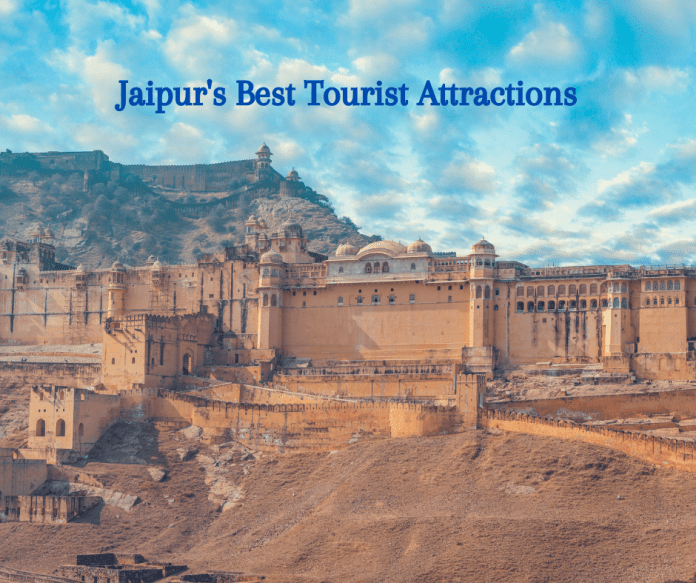 Rajasthan’s vibrant state gets a splash of pink thanks to Jaipur. This exotic resort, also known as the ‘Pink City of India,’ is excellent for a luxurious vacation. Jaipur, brimming with warmth and opulence, is the ideal location for travellers from all over the globe to delight. The unique blend of traditional and modern activities will keep visitors of all ages occupied for days. there are many of Jaipur’s Best Tourist Attractions which may give you amusing moments to go and visit.

The warm and lively Pink city is an excellent location for learning about Rajasthani culture and tradition. As you travel through the city’s alleyways, the magnificent forts, palaces, and Havelis strewed about to give you a glimpse into the rich lives of the Rajputana rulers. You may also visit the museums and memorials of the country’s most famous rulers to put yourself in their shoes and feel like royalty.

Jaipur entices visitors looking for a great vacation and a revitalising getaway while learning about Indian culture and traditions. The following are the best sites to visit in Jaipur.

The fabled Amber Fort is a seven-century-old Rajputana castle around 11 kilometres outside of Jaipur. It is a UNESCO World Heritage Site and one of India’s most stunning architectural wonders.

The Amber fort (also known as Amer Fort) was built on the Aravalli hills by Raja Man Singh in 1592 and finished by Mirja Raja Jai Singh. The magnificent fortification, constructed of red and yellow sandstone and white marble, gives a breath-taking perspective of Maota Lake. 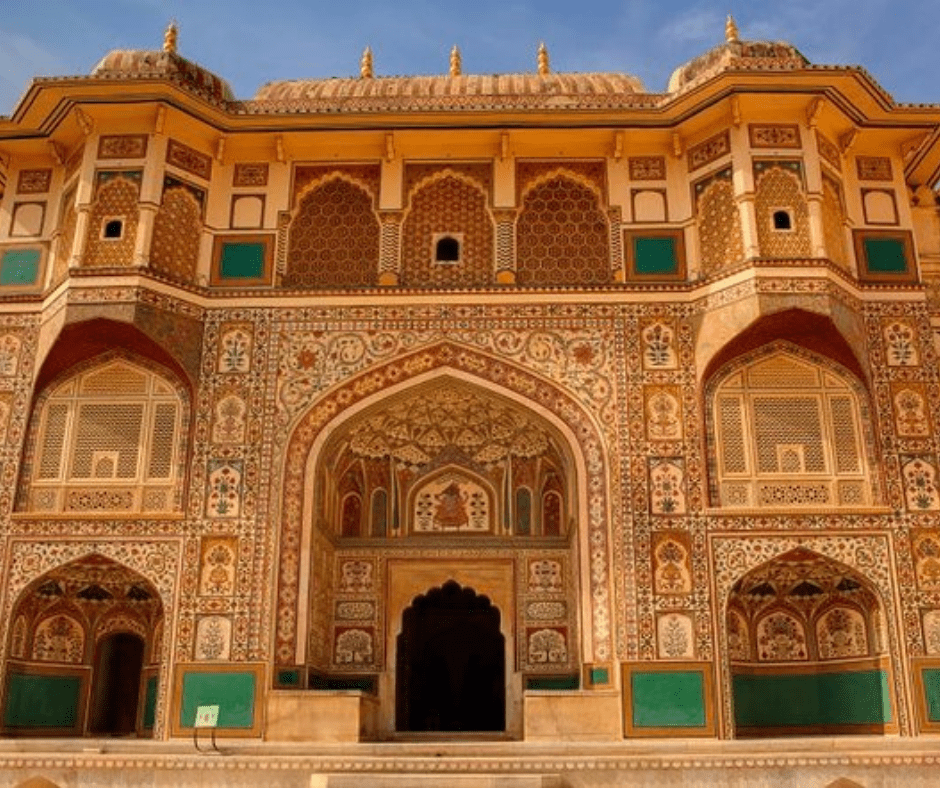 Diwan-e-Aam, Diwan-e-Khas, Siladevi Temple, and the Sheesh Mahal are among the palace’s many attractions, which are grouped into four courtyards.

The fort was built in 1726 under the patronage of Maharaja Sawai Man Singh II and has a magnificent combination of Indo-Persian architecture. The fort’s cyclopean walls are adorned with intricate lattice work windows that provide clear views of the surrounding area. You may take a stroll within the majestic red sandstone fort and envision life as it was during the time of the warrior monarchs who once lived there. 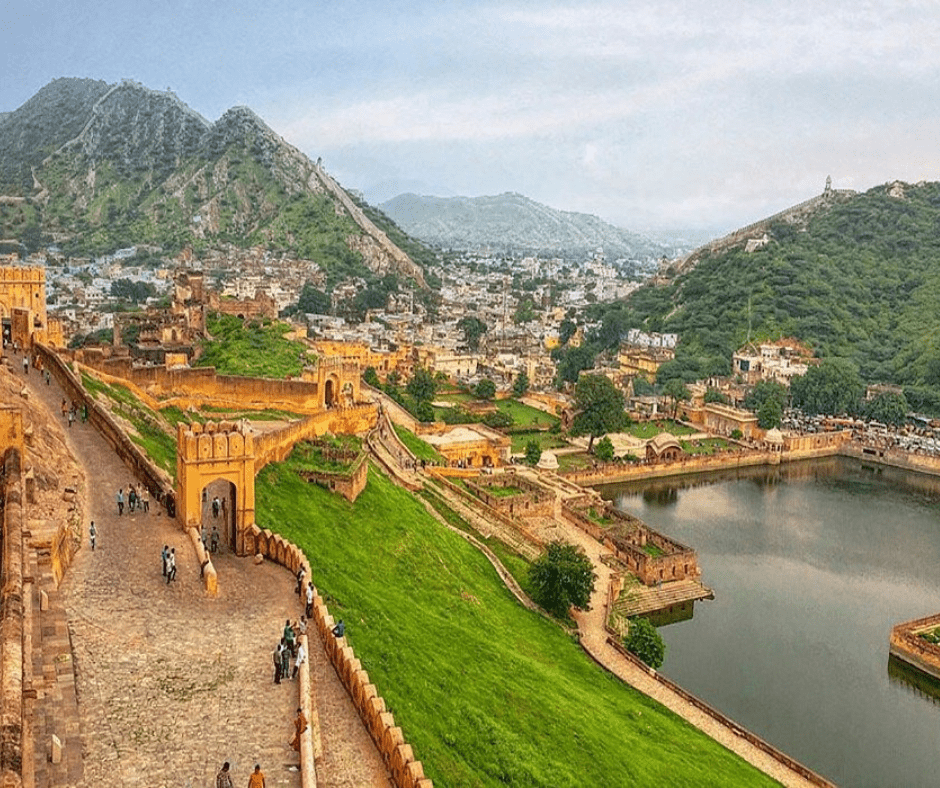 The ‘Jaivana Cannon,’ which is the world’s largest cannon on wheels and has only been fired once in its existence, is one of the fort’s main attractions. The central watchtower, the water heritage walk, Shubhat Niwas (warriors’ assembly hall), and the armoury are among the other features. Kal Bhairav Temple, Ram Harihar Temple, Lalit Mandir, Aram Mandir, and Vilas Mandir are among the important temples in the complex.

The Aravalli Hills’ Nahargarh Fort was erected to protect the royal palace of the Rajput warriors, the Amber Palace. For 300 years, this magnificent fortress has stood guard over the charming city of Jaipur. Maharaja Sawai Jai Singh II built it in 1734 as a getaway palace for the monarchs and queens. Its remarkable Indo-European architecture and illustrious heritage have drawn visitors from all over the globe.

During the 18th century, the Fort saw significant historical occurrences. You may learn more about Jaipur’s history by visiting the temple devoted to the city’s kings, as well as seeing the magnificent Sheesh Mahal, visiting the wax museum, and taking photographs near the Jal Mahal. 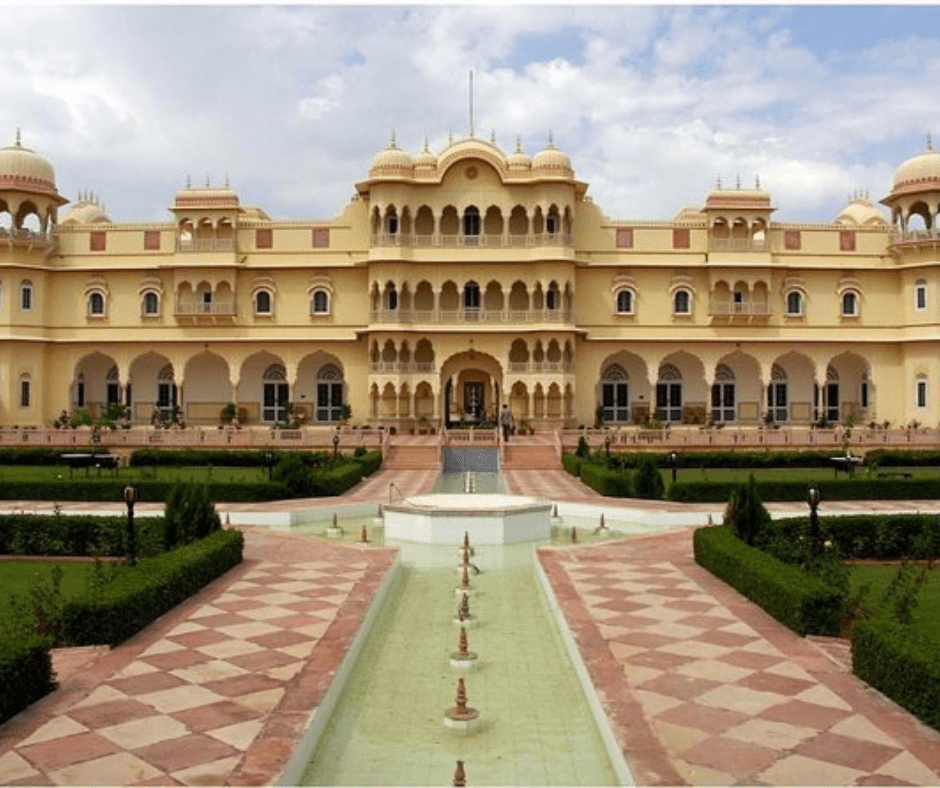 The ‘Madhavendra Bhawan,’ erected by Sawai Madho Singh, and the shrine of Rathore ruler Nahar Singh Bhomia, whose spirit tormented the building site until the fort was consecrated to him, are two more must-see sites.

Jantar Mantar is an astronomical observatory erected by Maharaja Sawai Jai Singh II between 1728 and 1734 in the centre of Jaipur. The observatory served as a meeting place for scientists from all over the world, connecting political, social, and religious behaviours to cosmology.

It is the biggest of the five such structures created in Northern India, and it is a UNESCO World Heritage site. It has enormous stone devices with stunning geometric shape combinations for seeing celestial bodies with the naked eye. Since the dawn of time, architects, mathematicians, painters, and historians have been enamoured by the precision and accuracy of these celestial devices. 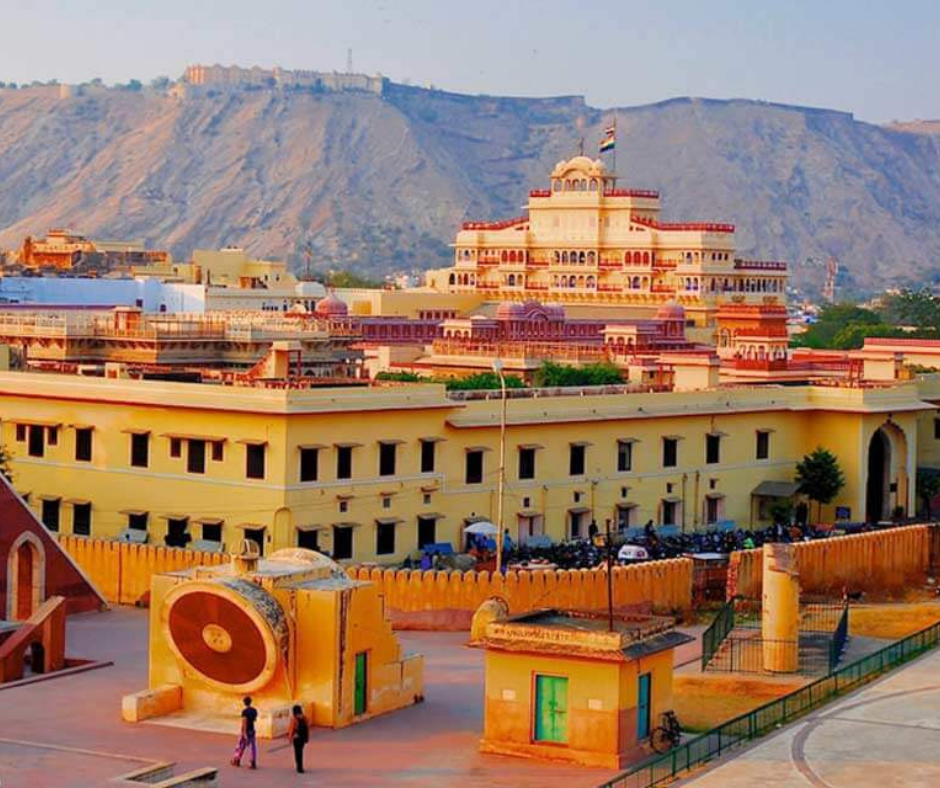 The observatory also has the world’s biggest stone sundial, which calculates local time and has so far piqued tourists’ curiosity. You must visit Jantar Mantar at midday to comprehend the method of estimating planetary motions by observation and computations, as the sensors’ readings are accurate when the sun is above.

The City Palace is a magnificent complex of courtyards, gardens, cenotaphs, and royal buildings located in the heart of the old city. It was designed and erected by Jaipur’s founder, Rajput King Maharaja Sawai Jai Singh II, and then enlarged by the emperors who lived there. 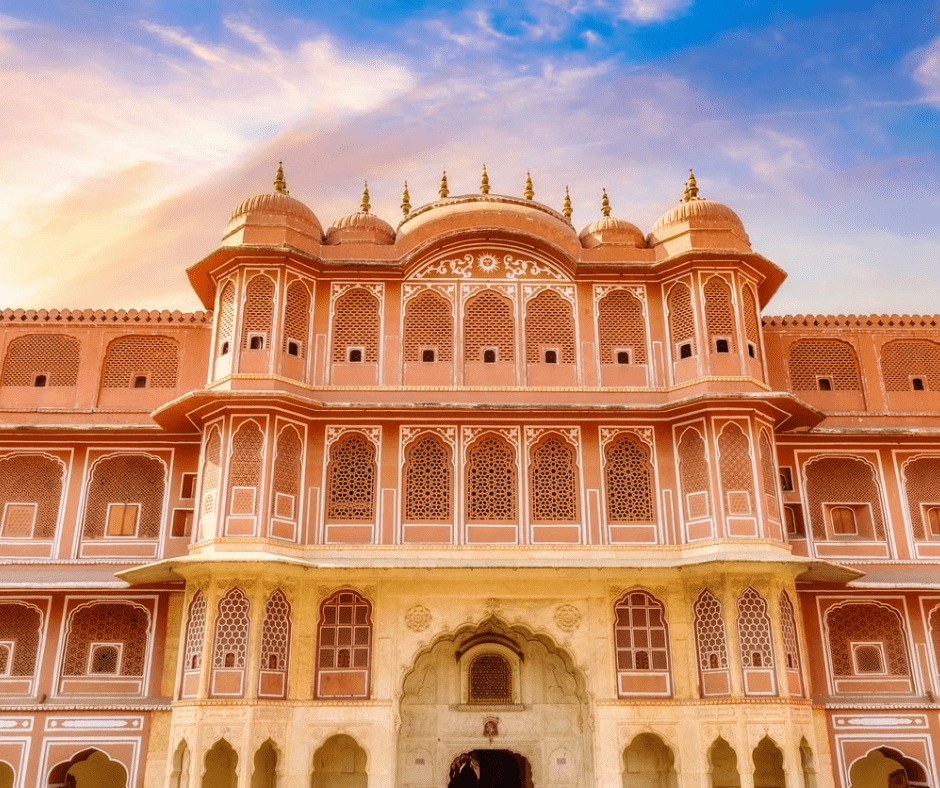 At the museum, you may see Maharaja Sawai Madho Singh I’s unique collection of royal attire, including Pashmina shawls, Benaras silk sarees, and other garments. The palace’s walls and ceilings are adorned with Rajput weapons from the 15th century, as well as well-preserved Rajputana paintings, Sanganeri prints, and folk needlework items.

Hawa Mahal, Jaipur’s most famous landmark, is a 200-year-old structure in the city’s core. The five-story palace features 953 lattice work windows and is known for its unusual honeycomb pattern and Indo-Islamic architecture. Maharaja Sawai Pratap Singh erected it as a summer palace in 1799, painting it pink and adorning it with floral designs, dome-shaped arches, and patterned pillars. 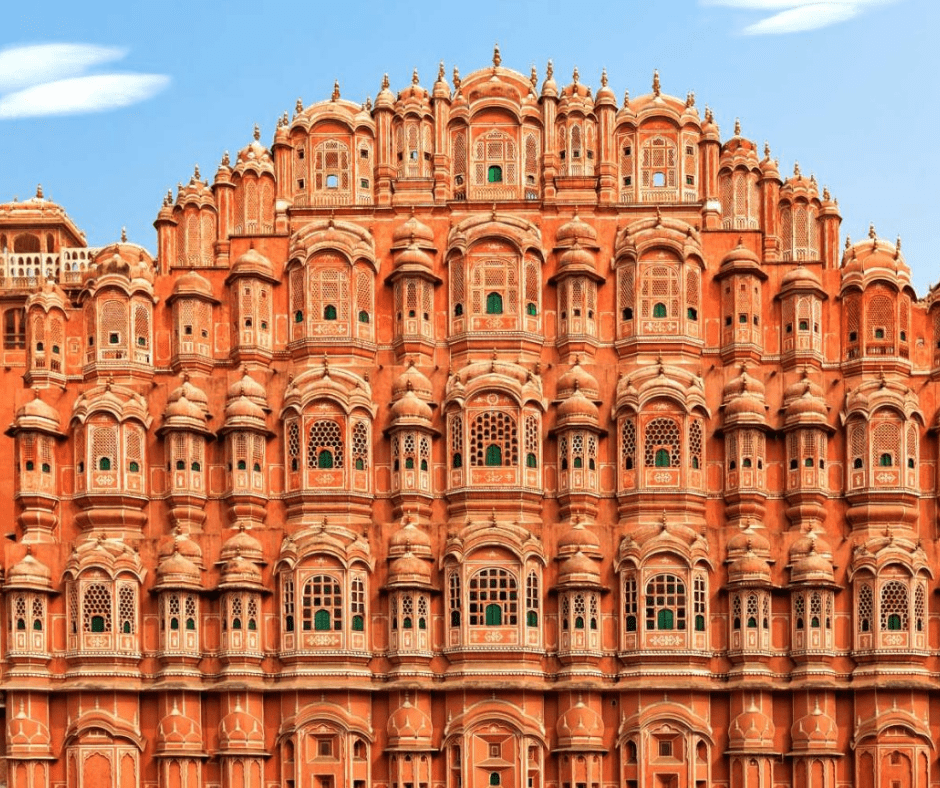 The palace was built to provide clear views of the City Palace, Jantar Mantar, and Sireh Deori Bazaar. Its ornately carved windows, known as ‘Jharokhas,’ allowed the royal women to see royal processions and everyday market activity from the street without being seen by the general people.

The first story, known as the Sharad Mandir, was used for royal ceremonies, while the second floor, known as the Ratan Mandir, was embellished with vivid glass work, and the remaining two floors were known as Vichitra Mandir and Hawa Mandir. Prakash Mandir, on the top level, featured an open terrace on either side with amazing views of the city. Looking through the fretwork windows, you may imagine their life and learn about Rajputana culture through the paintings and ceremonial armour on display in the complex’s museum.

The B.M Birla Foundation erected the Laxmi Narayan Temple, often known as the Birla Mandir, at the foothills of Moti Doongri in 1988. The Maharaja of Jaipur donated land for the temple for a nominal fee of one rupee. Birla Mandir is known for its architectural brilliance, which is made entirely of pure white marble.

The temple is dedicated to Laxmi (the goddess of riches) and Narayan (Lord Vishnu), and it has hand-sculpted marble images of the deities. The Laxmi Narayan temple, like the other Birla temples around the country, represents the diversity and complexity of Indian culture as well as Hinduism’s holistic approach.

Its three-dome design is a symbol of India’s secularism among various religions. The temple’s domes, ceilings, and walls are adorned with intricate motifs and mythology-based sculptures. The presence of monuments of famous thinkers and religious gurus from all over the world exemplifies modern Indian culture’s inclusivity.

The beautiful green grounds give tranquillity to the spiritual ambiance while complementing the temple’s architectural beauty. Tourists from many walks of life come to see the temple’s enchanting beauty.

Chokhi Dhani is a resort with a Rajasthani motif that is 28 kilometres from the city. It was founded in 1989 to provide tourists with a taste of rustic rural life and traditional Rajasthani culture. The resort offers a traditional feel to it, with mud huts adorned with ethnic designs, Rajasthani folk singers and dancers entertaining guests, and real Rajasthani cuisine. 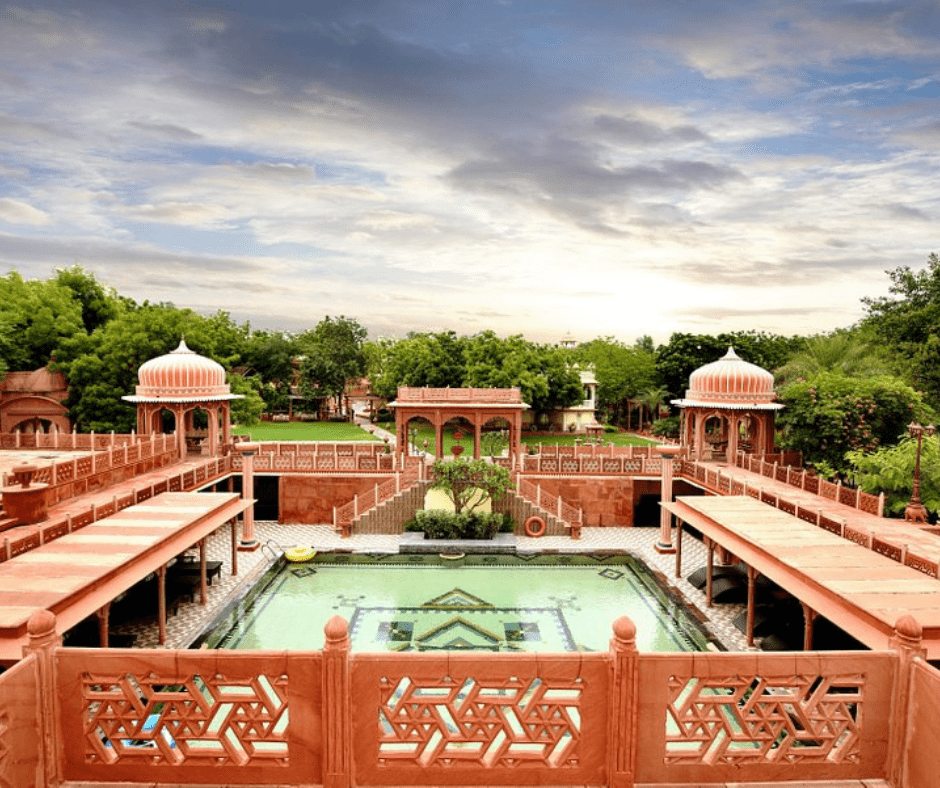 Evenings at the resort are lively and entertaining. Live folk dance and song (Chaupal Nach Gan Re), acrobatics (Nat Ro Kartab), puppet shows (Kathputali Ro Nach), and magic shows are among the activities available (Jadu Ro Khel). At the artisan fair, you may buy local products and take leisurely rides on camels, horses, and elephants.

The Ministry of Tourism has designated Chokhi Dhani as a 5-star luxury hotel. The resort’s Royal Cottages and Haveli Suites, which include historical treasures, vintage furniture, and handcrafted items, are ideal for anyone wishing to immerse themselves in Rajasthan’s royal culture.

Khole Ke Hanuman Ji Temple is a Hindu temple dedicated to Lord Hanuman that was built in 1960 by Pandit Radhe Lal Choubey. The temple, located near Lakshman Dungri on the Delhi bypass in Jaipur, offers panoramic views of the serene and natural environs.

After Pt. Choubey saw a rock with a sculpture of Lord Hanuman and began offering prayers on the site, the Khole Ke Hanuman Ji temple was established. He constructed a tiny temple on the site, which was progressively developed to its current size. Locals hold the shrine in high regard, and worshippers throng to it on Tuesdays and Saturdays. Traditional offerings such as Dal-Bati Churma and Swamani Prashads are made using raw materials provided by worshippers.

This is another one of the best Jaipur’s Best Tourist Attractions Rajasthan’s economic capital, Johari Bazaar, is known for its handicrafts and indigenous items. Johari Bazaar, located near the Hawa Mahal, is Jaipur’s oldest and most colourful bazaar. It’s a shopper’s dream, with vivid handcrafted goods, delectable local cuisine, and high-end Kundan jewellery. 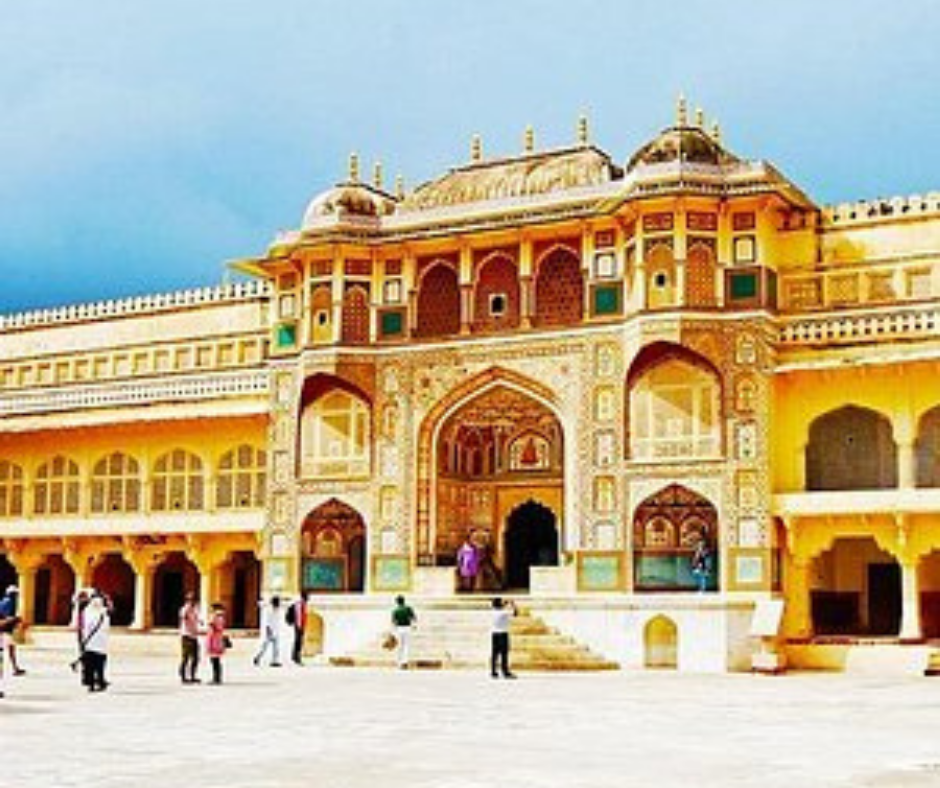 Authentic Jaipuri jewellery in gold and silver set with diamonds, emeralds, and rubies can be purchased. The market’s small aisles are brimming with vibrant traditional wear, embroidered juttis, and opalescent lehengas.