A vacuum cleaner should be the new election symbol for the Aam Admi Party in the Punjab election, in 2022 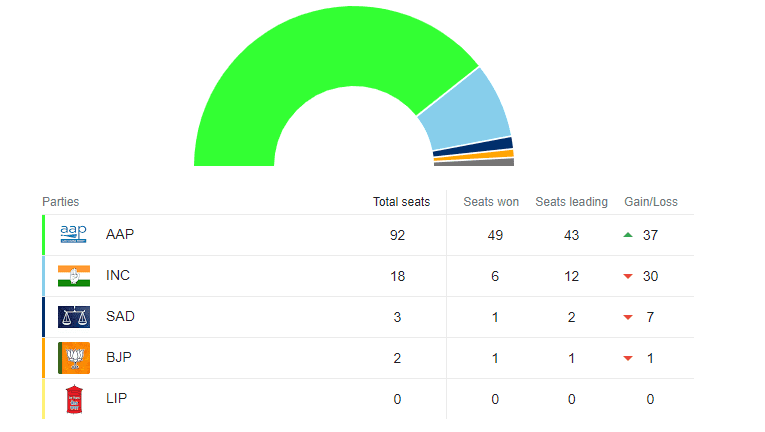 The Aam Aadmi Party appears to have won the Punjab Assembly Election 2022 on Thursday. According to polling data as of 12 p.m., the AAP was ahead in 90 of the 117 seats in Punjab.

AAP Punjab co-in charge Raghav Chadha said the people of the state have given a decisive mandate to AAP CM candidate Bhagwant Mann as the party marched towards victory in the province.

He said that the AAP had urged people in Punjab to use the ‘jhadu’ (broom), but they instead chose to utilize the vacuum cleaner. Punjab, according to Chadha, will now experience progress and will no longer be associated with drug abuse.

“From now on, Punjab will be known as ‘Uthta Punjab,’ not ‘Udta Punjab.’ All credit goes to AAP activists, who worked for the party regardless of the time of day or night, summer or winter. The AAP will work for everyone in a gradual manner, according to the party’s head.
According to Chadha, the people of Punjab supported Arvind Kejriwal’s policies and the duo of Kejriwal and Mann.

“Punjab has demonstrated that it prefers the Arvind Kejriwal-Bhagwant Mann duo over any other. All other parties attempted to discredit us by calling Kejriwal ji a terrorist, but the public demonstrated that he is a’shikshak-wadi,'” Chadha said.

Punjab has adopted Kejriwal’s governing approach, according to another AAP leader and Delhi Deputy CM Manish Sisodia. “At the national level, it (the model) has received recognition.” “This form of government will be sought by the whole country,” Sisodia remarked.

Meanwhile, AAP fans and activists across various states were ecstatic over the party’s strong showing in Punjab. They were observed dancing and handing out Sweets.